I am grateful, the thermometer reads 51ºF. Less than one week ago we were well below zero. Although I have little tolerance for the sound of drip, drip, drip (more often than not, it portends disaster) I have welcomed the sound today. The sun is high and, when the wind is quiet, it warms my shoulders from above and my face from below as its illuminating rays reflect off the subsiding blanket of snow and ice. I could find the barns with my eyes closed for the sweet perfume of wet hay has settled over the pastures.The sheep have not been thrifty and have trampled much of their feed as bedding. The icy mattress which took months to form thaws rapidly as does all exposed ground. Our thick soils are good at producing a particularly soupy sort of mud, and I don’t much like this mud season. I have fallen on the ice more times than I would like to recount, last week alone, but would rather skid and dance briefly in the mud than slip and fall prey to the unforgiving force of gravity, even one more time, on ice. I welcome the return of liquid water. That may sound strange but because we have been so cold for so long, natural pools of water have been scarce and Joanna and I have worried about the birds and the deer. We were glad to know that a nearby spring was producing a small but constant stream. The thick blanket of ice which formed one evening last week must have been especially difficult for the deer. Their legs are so thin, seemingly unprotected. The ewes stuck close to their feed but managed to beat a path to their trough. I walked back and forth between the water for the rams and their shelter, once each day since the ice settled, to be sure that they could find their way through the otherwise unbroken sea. The roofs are now clear and I can see a bit of gravel here-and-there along the lane. The blue sky is lovely, the birds seem lighter and fly faster through it. They spill seed, carelessly, from the feeders. The opportunistic deer park themselves in just the right places to greedily collect the spoils. The reflected light of winter makes that season bright. The ground, this time of year, will become progressively darker as layer upon layer of snow and ice melts. Each stratum giving up its treasure, frozen within, such that the ever-increasing accumulation darkens the ground until the snow is gone and the trove dissolves into the soils below. The buds are swelling and our lamb crop is due to arrive anytime within the next week or so. And then surely spring will have arrived. We felt the need for a walk this morning. Joanna headed off along the trail, still knee-deep in snow, while I donned my waders and took to the water nearby. The stream lay deep within a narrow gorge and because the sun has not been all that high there was still lots of snow piled along the icy banks and atop a uniform sheet of ice which lay between them. It wasn’t until I made my way, upstream, to the dam that I spied photographic potential. I was able to walk along the wall of the outflow which provided good vantage from which to photograph this receding ice sheet. 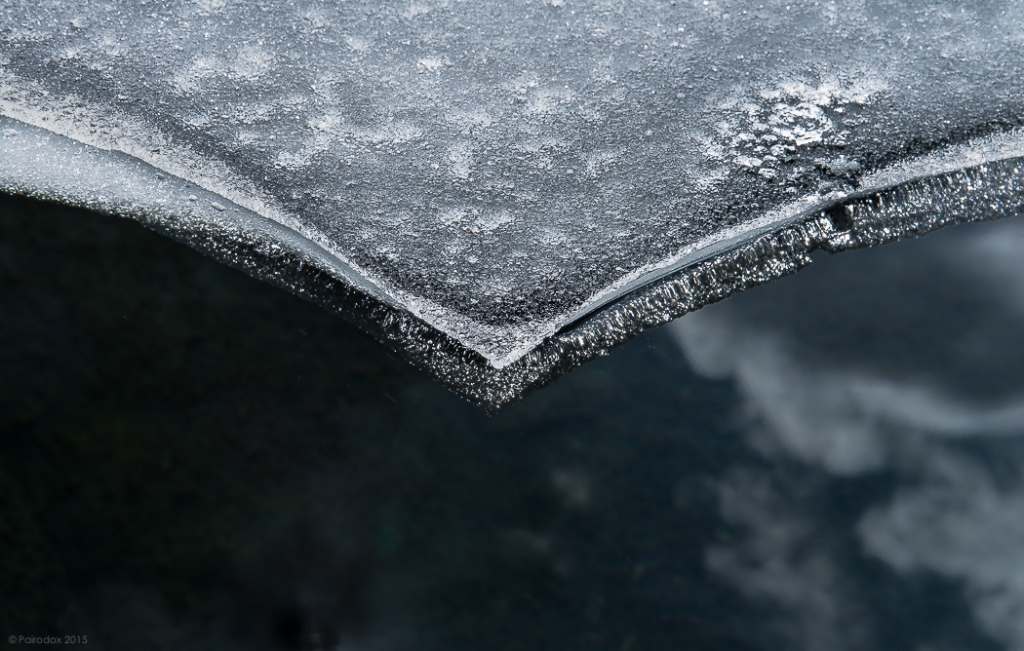