After posting an image of the snout of a combine one reader said that she looked forward to seeing more of the machine. Although I can’t present a combine set to harvest a corn crop, I can show you what the business end of a working soy bean head looks like. I have already reported that the bean harvest began at Wayne’s over the weekend and it was there that I was able to capture these views of a John Deere 7720 Titan II. It has a turbocharged diesel engine that puts out 145 horsepower to drive the 20,000 pound machine. Although a combine is a pretty large and formidable piece of farm equipment, its principles of operation are straightforward. If you look closely at the first image, down at ground level, you will see the metal fingers of the cutter bar. Once the bean stalks are cut by the reciprocating blade, the crop is delivered to the auger by the sweeping motion of the reel. A rapidly moving belt then delivers the plants deep into the combine where they are threshed to separate the grain from the remainder. The former is stored in a bin, and off-loaded periodically, while the latter is discharged back onto the field. It all sounds pretty simple but to walk around a combine such as this is to be overwhelmed by an array of very heavy drive belts, pulleys, chains, sprockets, shafts, motors, hydraulic hoses, and cables. It always amazes me that the darn things actually work … and work, they do. 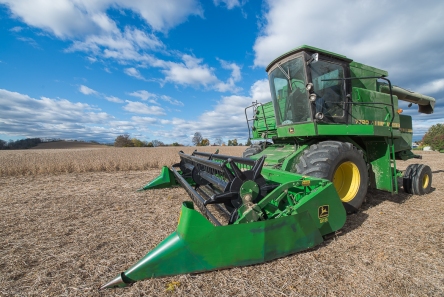 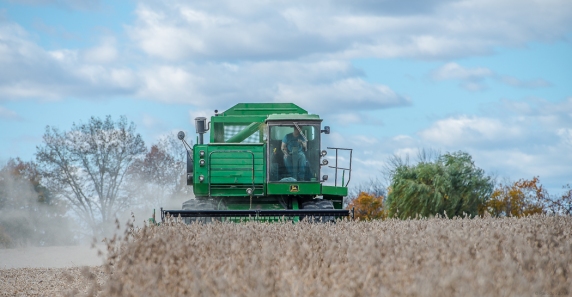 POSTSCRIPT: My good friend Maurice, at Duck? Starfish? But … 23? passed the following along for my appreciation. I responded that Joanna and I watched, and listened, smiled, laughed, and then smiled a bit more. Thanks Maurice.