We spent a couple of hours on Saturday morning at the Fourth Annual Howard Volunteer Fire Company Punkin’ Chunkin’. I discussed the same event and the three different sorts of catapults here in 2012 and again in 2013. The Trebuchet stores potential energy by raising a weight against the pull of gravity. When the weight is released, potential energy is transformed into kinetic energy which swings a massive arm, releasing the projectile. The Ballista works by storing potential energy in semi-rigid arms connected by ropes, much like a crossbow. My favorite catapult however is the Onaeger, or Torsion Catapult, shown in the first image. Imagine stretching a rubber band between two stationary pegs. Place a pencil between the lengths of rubber toward the middle of the span and wind the pencil around a few times. When you release the pencil the potential stored in the bands is released and the pencil will spin. The single torsion rope of the machine shown below was made of 1″ nylon and wrapped perhaps ten times between stationary posts. I was amazed that the projectile arm was twisted something less than 180° when the machine was ready for firing. I should mention that the members of Team Carbo, shown below, are the reigning World Champion Punkin’ Chunkers in the Torsion Division (their winning toss was measured at 3,105.34 feet). For the first time at this event, a compressed air canon was present. Team Sky Buster is currently ranked eleventh in the world in their division with a shot of 3,777.32 feet. My very particular reason for attending the Chunkin’ this year was to capture images which I wanted to try to stack, using a program called StarStaX, by Markus Enzweiler. This software is intended to be used to stack one hundred or more sequential images taken of the night sky to produce Star Trails. Although I haven’t yet tried my hand at this I thought the software might allow me to show the stages of a Punkin’ launch. The torsion catapult accelerated so quickly that its composite shot is composed of just four images.The second image of a trebuchet was constructed by stacking thirteen images. I liked the final product but wished that I could have selected just one of the thirteen to contribute the background information. As it is, the movements of four folks standing close to this catapult are distracting. The gentleman on the far right nodded his head during the sequence, the one to the far left took several steps forward. The gentleman who triggered the machine backed away from it after launch and I could not eliminate evidence of all of his movements from the final stack. I like the result anyway and especially enjoy the view of the punkin’ receding into the distance and over the lake. You may be interested to know that the burst rate of the D600 is 6 frames per second and that each shot was taken at 1/4000 of a second. 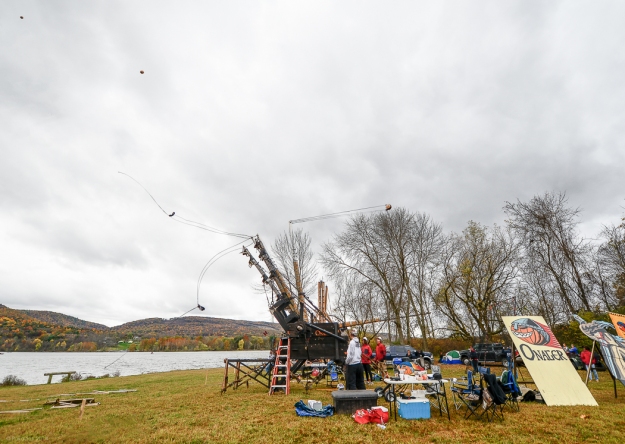