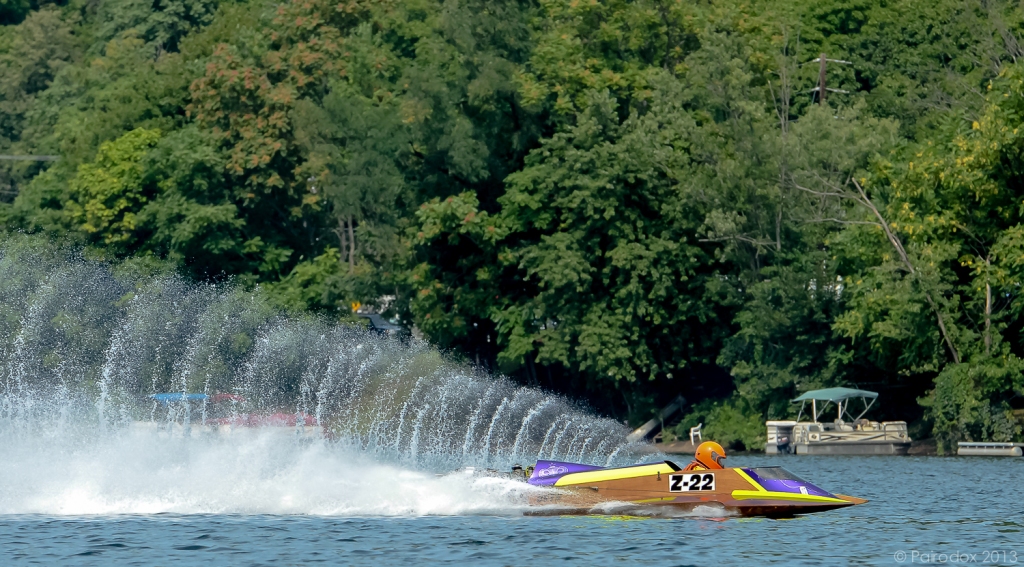 It was when we first moved to the Farm that we began hearing of the annual Labor Day Regatta which takes place down along the Susquehanna. I had always thought that the term Regatta was to be used only in reference to gatherings of either rowed or sailed watercraft, but I was very wrong and have since learned that it is appropriate to use the word to refer to a series of powerboat races as well. The Lock Haven Regatta is the largest one of its kind on the East Coast, second only to the National Championships of the American Power Boat Association. Indeed this year’s event will host the North American Championships for 500 cc modified runabouts, and for both 250 cc and 350 cc modified hydroplanes. If you’ve got interest in these designations you can check out the website of the APBA. Suffice it to say that these are crazy little boats (weighing just 300 – 500 pounds), which sport stock and modified engines (with displacements of 250 – 850 cc),  and go really fast (60 to just over 100 MPH). As a family, and when the girls were young, we never paid much attention to the annual event. Somehow homeschooling, our active involvement in 4H, running the farm, and having real jobs on and off of the farm, all seemed to keep us busy such that we never had much time for local events such as the Regatta. Yesterday was the first time in eighteen years that I took a few hours to watch some racing, and I’m glad I did. These boats are fast, and very loud (some turnover at more than 12,000 RPM). Although I do not consider myself a mariner, I did a bit of sailing when I was young and what struck me about these powerboat races was that the starts and strategies were just the sort one sees in a sailboat race. Drivers have three minutes, under a green flag, to get their boats on the course and in position for the start. After the three minutes there follows a one minute period under a white flag. The trick for the drivers is to finesse their approach to the start line, moving as close to full speed as they dare, such that they reach it just as the clock hits zero. Too early and the boat is disqualified, to late and the skipper is at a disadvantage. Once the line is crossed all throttles are full open and the race begins. Real speeds are reached on the straightaways but it’s at the corners that the true skill of the skipper is tested. Although the boats have rudimentary steering mechanisms it seems that weight distribution, the transfer of weight, and lots and lots of Body English is required to negotiate the corners while maintaining a competitive speed. The races I watched took place over a mile-long course and consisted of three laps. Although the racing was fast, it was clear to me that winning was more than a matter of speed. Strategy and quick thinking combine to produce winners in this sport. You may click the image above for a high resolution view or scan the gallery of additional images below. Postscript: I visited the Regatta again this morning. Check back soon for more exciting images.

Trio on the straightaway 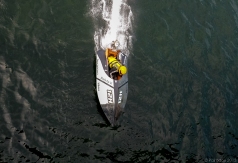 From the bridge above