The luster of mid-day

With thanks to Clement Clarke Moore … and given the recent Christmas holiday … the following quote seems a particularly appropriate way to begin this post.

The moon on the breast of the new-fallen snow
Gave the luster of mid-day to objects below.

I have always had an appreciation for images taken after dark and have noted that fellow WordPress photoblogger Patrick Latter does a nice job of this. Friday was particularly hectic. Wednesday’s snow added time to both morning and afternoon chores. On top of that Joanna thought that establishing email service with our not-so-local ISP would take a very few minutes. Three hours and four helpful technicians later she had the new account up and running. By the time we turned our attentions to dinner we were both well beyond our hungry. Neither of us was in the mood to cook and so we opted for local pizza takeout. On my way down the mountain I noticed the full moon (and, I mean genuinely full, we are experiencing a waning gibbous moon today). Although we had nearly eight additional inches of snow yesterday, the sky was perfectly clear on Friday night and as I made my way to town the moonlight illuminated the trees along the road and cast shadows into the surrounding wood. After wolfing my dinner I excused myself quickly and without ceremony from the table … pulled on my coveralls … grabbed my camera … and went for walk down to the pond. In a stroke of genius my daughter had recently given me an infrared remote for the D600. In anticipation of taking some images at night I had familiarized myself with protocols for timed exposure. It was cold and I was pretty tired (at 9:30 PM it was well past my bedtime) – but the wind was still and the snow had not yet begun to fall. I took several dozen shots including the one below. For those with interest the image was taken with the D600 on a tripod at ISO100, 14mm, f4.5 at 15 seconds. Although I gave a quick review of each shot after it was taken, I was astonished when I looked at these in detail. I was astonished because … forgive me for sounding silly … it was dark outside when I took these … so dark that I needed a flashlight to enable me to see the camera’s knobs, dials, and switches. Mr. Moore would certainly have noted and appreciated the fact that the moon truly did gave the luster of mid-day to objects. Amazing, don’t you think? 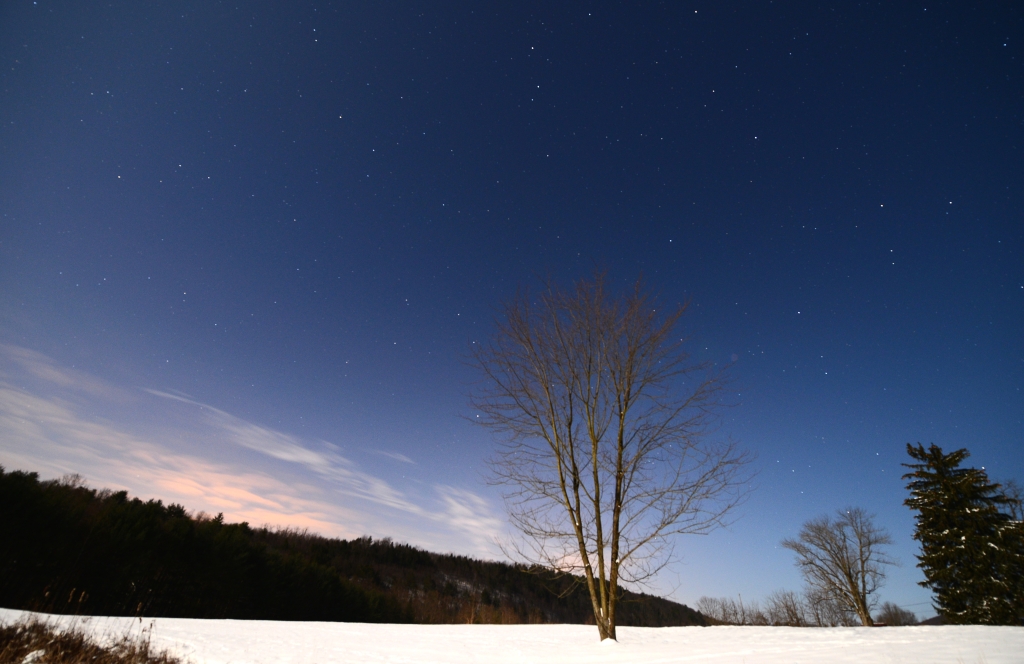