Let’s begin with a little Chemistry. When calcium carbonate (CaCO3) is heated to 1000°C carbon dioxide (CO2) is released leaving behind calcium oxide (CaO). Calcium oxide is known as quick lime because it reacts vigorously with water to produce calcium hydroxide or slaked or hydrated lime (Ca(OH)2).  Throughout the 19th century, here in Pennsylvania and elsewhere, many farms had lime kilns which were used to heat limestone (CaCO3) to produce quick lime. This was either applied directly to fields (in late fall I would guess) or allowed to mature in piles exposed to moisture and then spread as hydrated lime on agricultural fields as a way of sweetening the soil or reducing its acidity. I’m fairly certain that the kilns shown below are draw kilns which were loaded with alternating layers of limestone and fuel-wood. The bottom image shows the top walls of a combustion chamber formed from fire brick. When the fuel was ignited quicklime was produced and this dropped through the grate (on the left in the middle photo) at the bottom. The installations below were built into hillsides so the top of the kiln could be conveniently accessed by earthen ramps up either side. We have driven by these kilns for years and wondered about them. I stopped today to take some pictures and to talk to the owner of the property on which the structures stand only to discover that they are ” … very old.” 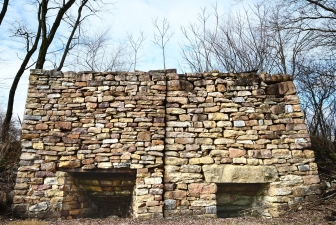 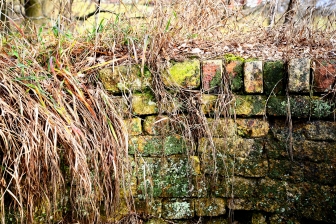