Yes, you read correctly, Joanna and I attended our first ever Punkin’ Chunkin’ today at Pennsylvania’s Bald Eagle State Park. We were up early and the day began uneventfully as we embarked upon or usual rounds of Saturday chores. I was just thinking about winterizing the bee hives when up the drive came some very good friends with their very new baby. As we admired the baby, Estella’s parents told us they would be attending a Fall Festival hosted by the Howard Volunteer Fire Company. They added that although there had been several autumn festivals in the area this would be the only one that would feature Punkin’ Chunkin’. Having never heard of or had the opportunity to watch a genuine Chunkin’ this was an event we absolutely had to experience – so off we went. Upon our arrival we quickly learned that Punkin’ Chunkin’ involved large catapults. There were six Trebuchets at this particular gathering and each was overseen by a team of three or four people. The object, it seems, was to see which team could launch a pumpkin the greatest distance out over the lake. Before sitting down to write this post I did a quick internet search and learned that Punkin’ Chunkin’ is, in some circles, quite serious business and that the Guinness Book of World Records lists the farthest distance to fire a pumpkin as 5,545.43 ft, well over a mile. Although this Guinness record was established by a gigantic air gun, the Trebuchets at our local get together were driven by either weight (and gravity) or by tension-loaded rubber belts. We watched as pumpkin after pumpkin took flight out over the lake. We estimated that the errant cucurbits flew nearly 500 feet out into the lake and nearly as high at maximum altitude. The air was clear and the wind blew a bit but it turned out to be an enjoyable event. There was lots of good food available, stalls of handmade items and trinkets, and even a falconer was circulating with her bird. If you should be in this part of the world next year perhaps you might take in Punkin’ Chunkin’ at Bald Eagle State Park. Click any of the images below and you will migrate to carousel views of two different launches … the x in the upper left will bring you back to this post. 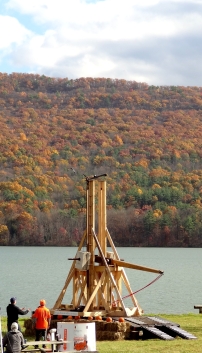 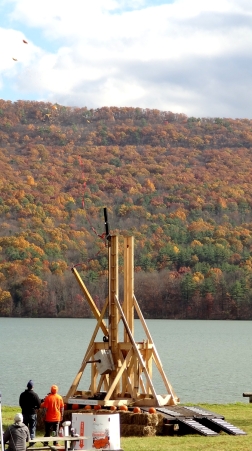 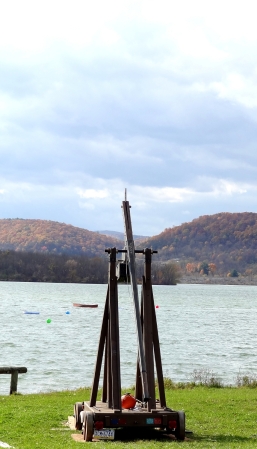 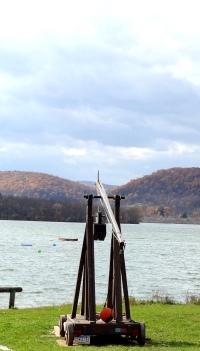 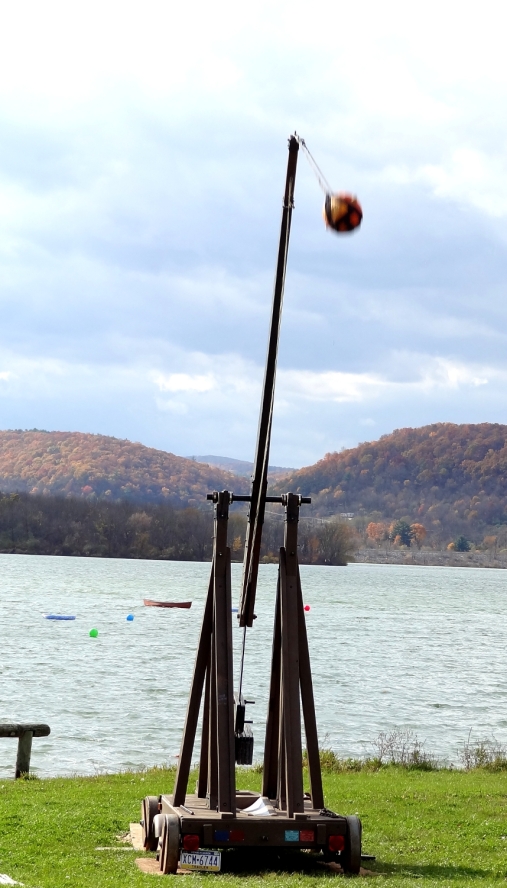