Reflection on the amish 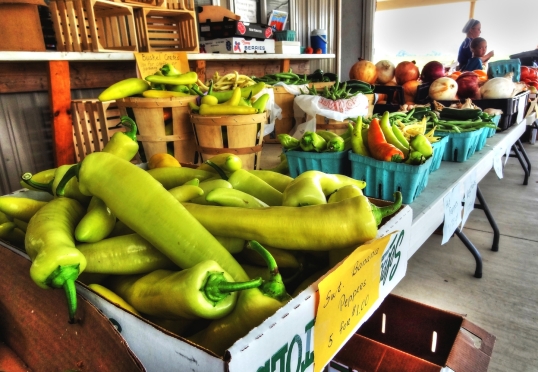 It’s that time of year when farm stands pop up across our adjacent country-side. The one shown here is overseen by an Amish family in nearby Beech Creek. On the day we visited this particular stand we brought home cucumbers, zucchini, summer squash, plums, peaches, a loaf of home-baked bread, and a whoopie pie for me (Joanna was aghast but I had missed lunch and was very hungry). The Amish are, I believe, misunderstood by some of the English (non-Amish) in our area. In my experience I have observed the Amish to be honest, hard-working, people. During the summer months they are out, working the land, from sun up (and before) to sundown (and after); but, of course, never on Sunday. To look at the hands of an Amish person, of either sex, speaks volumes. And anyway where was I when a life of hard, honest, work became unfashionable? Amish families are large, cohesive, and multi-generational. I believe the negative feelings held by some may stem from a characterization of Amish as thrifty to a fault. I have not found this to be the case and have tremendous respect for the Amish I have come to know. Our introduction to the Amish came about soon after we moved to the Farm. There was a large concrete-stave silo on the property which we were not interested in keeping; we viewed it as a structural liability and a safety risk. We put an ad in the paper and soon heard form an Amish farmer who promised to disassemble the silo, haul it away, and reassemble it on his place. I assumed the job would involve one if not two good-sized cranes, the same number of heavy skid steers, and a small army of well equipped workers which would arrive complete with safety equipment including scaffolding, fall harnesses, ropes, and hard hats. The day of the event arrived and a van, driven by an English, came up the drive and dropped off a half-dozen local Amish, including a couple of younger boys, along with two Amish ‘specialists’ from out-of-town who would do the actual disassembly. After the appropriate introductions were completed I was asked for a few bales of straw. Before I returned from the mow the specialists had climbed the silo (without scaffolding, ropes, harnesses, or shoes) and began to quickly and efficiently take the structure apart, stave by stave. As each 70 pound element was removed it was dropped to the straw bales below with a very dangerous sounding thud. The younger boys gathered the staves and stacked them on a trailer that had been stationed nearby. By day’s end the job of deconstruction was complete. The next day an English came to retrieve the trailer – and that was that. Amish folks work hard and spend their money wisely – what’s so bad with that? Postscript. The only surprise that came out of this experience occurred at lunch. My preconceptions of the Amish prepared me for a noon-time meal of meat pies, home-made bread, home-grown fruits, and water. In the evening, after everyone had departed, Joanna and I took a walk to look over the absence of silo to find a significant accumulation of trash. The abandoned detritus from lunch included wrappers from Snicker’s Bars, empty bottles of Mt. Dew, and wrappers from sandwiches purchased at Subway! Talk about balloons burst. Oh well!